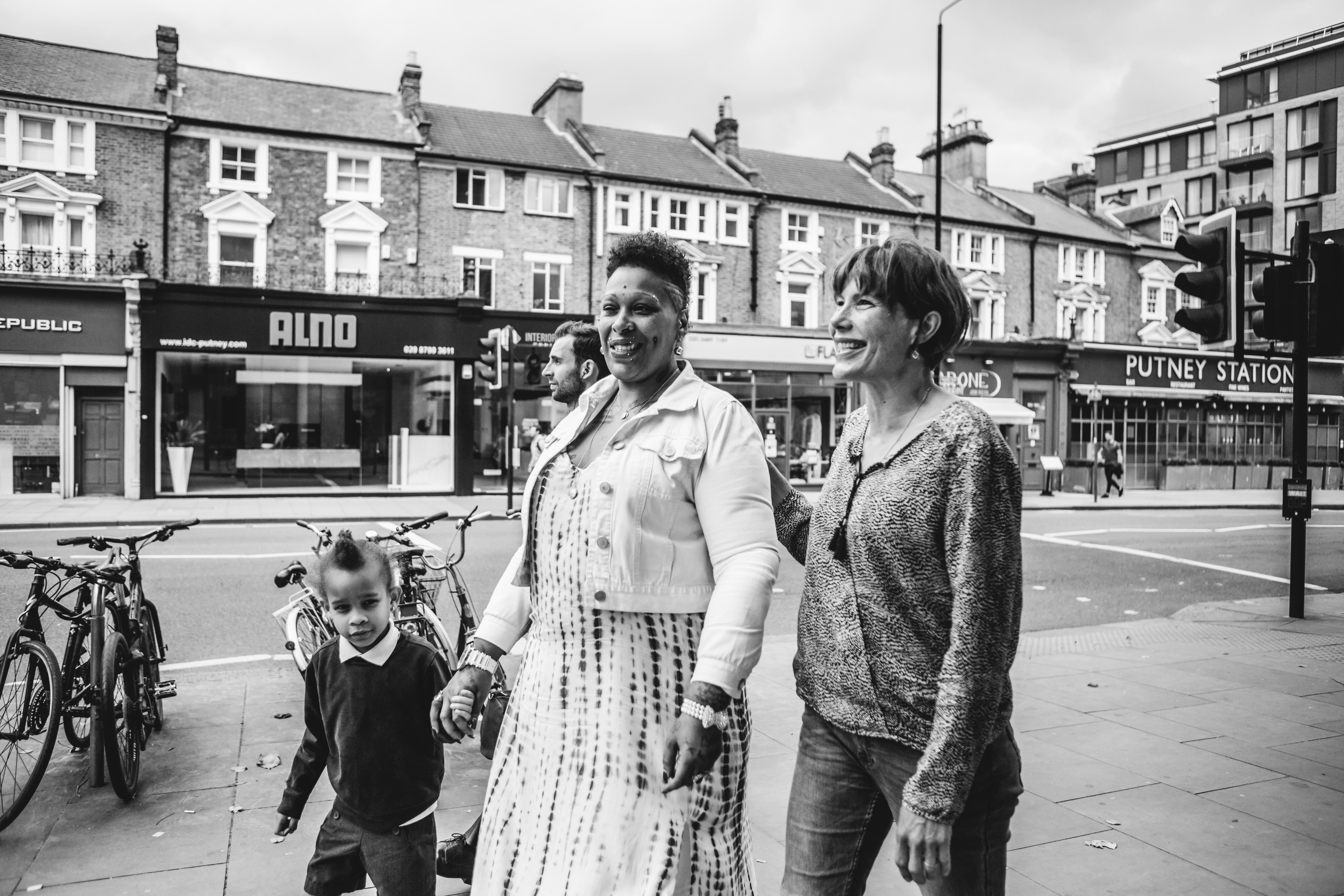 In 2016 Lorraine had the courage to stand up in front of 250 people at our carol service, to talk about how Home-Start Wandsworth had helped her. This is her story:

My name is Lorraine. I live in South West London and have four children, two of them in their early twenties, a teenager and a little girl who only just started school. I myself grew up in care from the age of four. I was in and out of secure units and psychiatric hospitals most of my adolescent life. At 17 I was diagnosed with borderline personality disorder and depression, which I have struggled with over many years.

My journey with Home-Start began in 2012. Tallulah, my youngest, was born that year. Whilst pregnant I had suffered carbon monoxide poisoning through a faulty boiler in my home. It took many weeks for the doctors to discover this, they couldn’t be certain that my baby hadn’t been harmed. My pregnancy resulted in a very traumatic birth during which doctors thought my baby had died.

It was an especially tough time for me. I’d been suffering from post traumatic stress disorder for over two years after being attacked in my home by someone that I had trusted. I’d been depressed during my pregnancy and I found myself alone with a new baby and my three older children to look after. My oldest suffers from a blood disorder. He had given up on himself, was struggling to come to terms with his illness, was missing his doctor’s appointments and refusing to take his medication regularly. He became quite unwell and went into “crises” more often, resulting in many hospital admissions and stays in intensive therapy units where on one occasion he went into cardiac arrest.

My younger son was diagnosed with epilepsy aged four. Due to uncontrolled seizures in his early years, the way his brain processed information had been affected. I’d been battling with his school for a while as it was not giving him the extra support he needed.

On top of all this, my physical health was poor. Due to my depression, subsequent psychiatric drugs and my immobility due to the isolation I suffered, my weight had increased up to 34 stone. I needed a custom made wheelchair because I couldn’t fit in the standard one to be able to go out with my children now and then.

Then I developed a stress-related bowel disorder. A related malabsorption problem made me lose over 17 stone of weight in a very short time, leaving my body in a malnourished state. The many years of being overweight and the quite physical treatment that can occur in psychiatric hospitals resulted in my lumbar spine crumbling. I had nerve damage in my legs, meaning I could not stand in one spot for longer periods, like washing up and queueing in shops.

After having Tallulah, a lovely midwife who was visiting me at home referred me to Home-Start. Kelly and Sue, the deputy manager and manager of Home-Start Wandsworth, initially came out to see me at home, then matched me with my Home-Start volunteer, Anne. When Anne came to support our family, I was seriously struggling with the logistics of daily life. My post box was overflowing with appointment letters and bills. I was so overwhelmed by the amount of paperwork I had to deal with, that I kept missing appointments, had to rebook them and at times was just lost in the system.

Dealing with all these issues on a daily basis was very hard. I was also struggling with trust issues. But Anne came into my home without judgement. We would sit on my living room floor, open the mail and confront things together. We’d sort through the letters, Anne helped me set up a filing system and got files for each of us and our hospital correspondence. She helped me manage a diary, re-arrange appointments and when calling up making sure to leave details of the time and reason for my call so there could be no discrepancies.

As Tallulah grew older she wasn’t meeting milestones and had stopped giving eye contact. Anne trusted my instincts as a mother and supported me, getting to GP and hospital appointments. Eventually, Tallulah was diagnosed with autism, which meant more hospital appointments, speech and language therapy, occupational therapy and physio. Anne supported me throughout. Also, through Home-Start training, Anne heard of the Enhanced Children’s Centre, a provision for families with young children with special needs, and we began to attend weekly for play therapy sessions. I embarked on therapy myself. Without Anne, I would not have been able to take up this much-needed help. She encouraged me to get to my sessions, keep a record in my diary and looked after Tallulah whilst I was at the therapist. She supported me getting to gastro outpatient appointments. During in-stays for tests, Anne would always be that voice of reason, help me to arrange childcare and has even convinced me to go back into hospital after discharging myself.

Anne also helped me to obtain special equipment like a perching stool for washing up and cooking, so my legs didn’t go numb when I was standing. She was the one who took me and my beloved dog, Karla, to the vet, to put her to sleep, after spending 15 precious years with her by my side.

On the days we weren’t covering miles going to appointments, Anne would bring over lovely fresh ingredients and we would prepare great meals together. She taught me lots about food and the importance of being good to our bodies by putting good nutrients inside of us after I’d spent so many years surviving on Coke for the fast sugar. I would not be standing here, the strong resilient woman I am, were it not for Home-Start and Anne. Home-Start is sadly one of the very few organisations left that support families like mine with practical emotional and consistent support, inside and outside the home. I didn’t grow up with a proper mother. Anne at times was a maternal figure, a role model and simply my mate! She could be a voice of reason when my 15-year-old wouldn’t attend his hospital appointments or a shoulder to cry on when I did not know which way to turn. Home-Start and Anne have helped myself and my family look for the silver linings. They gave us a chance and stood alongside us as a family – as individuals. Never in judgement or against us. Getting up every morning and knowing that people care and are in your corner makes life a little easier.

Sadly funding for staff and resources to train volunteers like Anne to support families like mine is low. I no longer have support from Home-Start although I still keep in contact with Anne as a friend. I still have therapy once a week. My eldest daughter now has children of her own. My older son is at university studying accounting and finance. The younger one is in his first year of his GCSEs and Tallulah has started school and is doing great.

Home-Start, who train and provide volunteers like Anne, cared about my family, for no other reason than that we matter. That’s a nice feeling – when someone cares about you – you slowly begin to care about yourself.