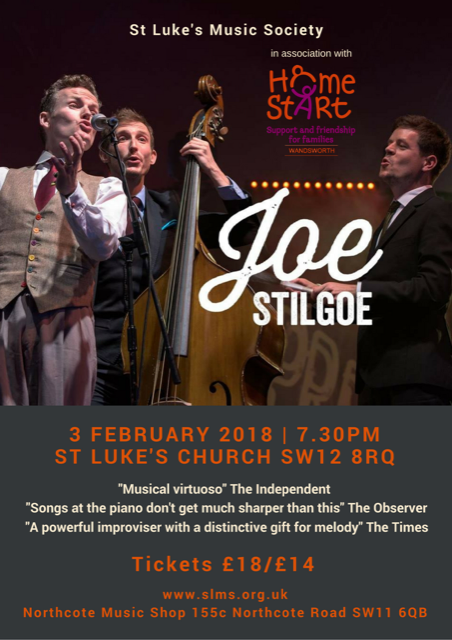 Back in early February when the weather was much warmer, 450 people gathered in the beautiful St Luke’s Church in Battersea to see the internationally acclaimed Joe Stilgoe Trio perform a concert in aid of Home-Start Wandsworth. Stilgoe, on piano and vocals, displayed wit, humour and virtuosic musicianship as he developed an easy rapport with the audience and performed a selection of his own songs from his 5 albums, including Totally, Rainbows in my Teacup, Popcorn and We Should Kiss, as well as one from his new musical adaptation of The Jungle Book. The trio also delighted the audience with their beautifully original treatments of songs by Cole Porter, Nat King Cole and Chuck Berry.

Halfway through the second half Stilgoe took requests from the audience and spontaneously put together an eclectic medley of songs including Moon River, Hotel California, the Scooby Doo theme tune, Moonlight Sonata and Justin Bieber’s Despacito. Twice during the show, Stilgoe moved away from the piano and joined his double bassist, the inimitable Tom Farmer, and drummer, the excellent Ben Reynolds, at the front of the stage, first for an unforgettable percussive medley of It Had To Be You and King of the Swingers, with harmonies sung by Farmer and Reynolds as the latter played his brushes on the side of the double bass, and later for a toe-tapping rendition of Rhythm of Life.

The audience comprised die-hard Stilgoe fans and Home-Start Wandsworth supporters as well as regular St Luke’s Music Society patrons, who are used to concerts by the some of the world’s best classical performers, including Mitsuko Uchida, Mark Padmore and Sir Antonio Pappano, and many of whom rated the Stilgoe concert as in the top ten of all concerts performed at St Luke’s in the last 15 years. Loyal Stilgoe fans were far from disappointed and those who had never seen him perform were seduced by his talented singing and playing, irresistible repartee and terrific showmanship. Stilgoe will have made lot of new admirers that night.

One member of the audience said “ What a truly incredible evening….. Such talent, such an original format & all so energetic & fun. I loved every precious second as did those around me. I didn’t stop smiling and foot tapping the whole way through.”

Stilgoe, whose sister Holly is a volunteer and trustee for Home–Start Wandsworth, praised the charity’s work in the community and encouraged the audience to give generously, which they did, donating nearly £1,500. A huge thank you to everyone who contributed to the collection and to Joe himself, who donated his fee for the night. The total amount raised was a fantastic £5,300.