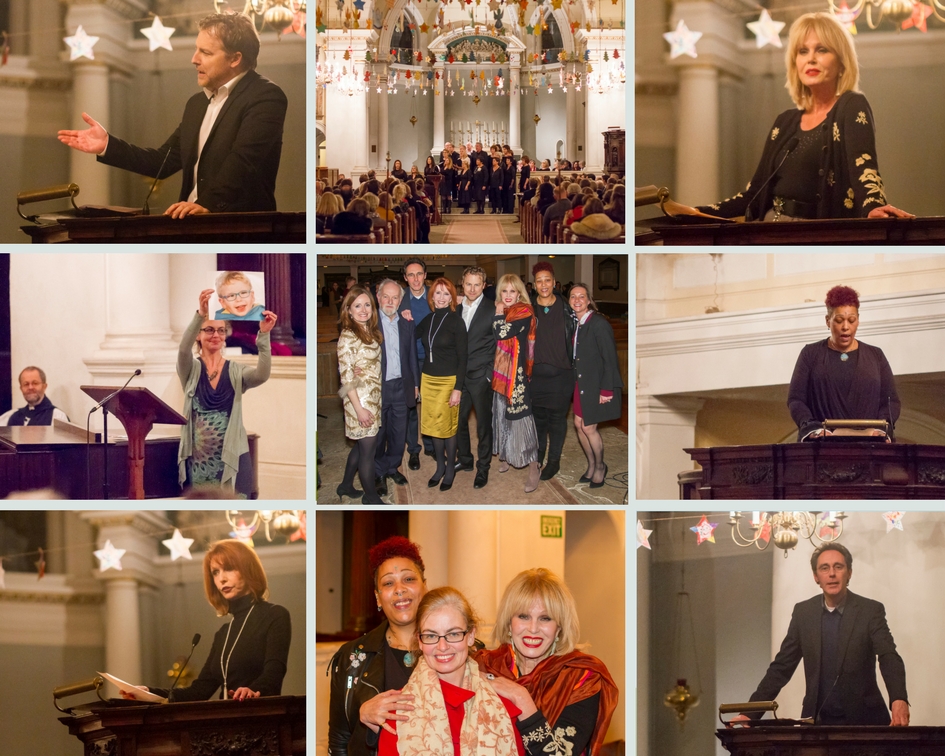 The third annual HSW carol service was held on 19 December 2017 at St Anne’s Church in Wandsworth, helping to raise much-needed funds in support of local families. Joanna Lumley and Holby City star Guy Henry joined Sir Richard Stilgoe, Jane Asher and Samuel West to provide heartfelt and entertaining readings. Most impressive though, was Lorraine Smith, who in last year’s service shared her own experiences of Home-Start Wandsworth’s support. She bravely stood amongst these accomplished celebrities and read an excerpt from The Bible. The audience of over 300 people were moved by the sublime sound of the award-winning Epiphoni Consort Chamber Choir who performed pieces such as In Dulci Jubilo and Irving Berlin’s White Christmas.

The children of St Anne’s School Choir were a huge hit yet again with the audience, giving delightful renditions of Do You Hear What I Hear? and We Three Kings.

They were joined by the spectacular sounding voices of amateur singers from the South West London based Eclipse Choir, who performed their own interpretations of Seal’s Kiss from a Rose and The Beatles’ Golden Slumbers.

Maria Kinsella, Chair of Trustees, welcomed everyone and mentioned the passing a few months earlier of Sue Winter, Home-Start Wandsworth’s manager, who had been instrumental in starting these annual carol services and who used to sing with Eclipse. Sue had, like all of the families we support, experienced very challenging circumstances when bringing up her own children and was inspired to set up Home-Start Wandsworth so that parents could be offered the support she hadn’t had.

Lisa Whipp, who has four children, three of whom have profound disabilities and complex medical needs, explained to the audience just how effective Home-Start Wandsworth’s support is. She said “Our wonderful Home-Start volunteers listened without judging or feeling the need to give advice; instead they signposted, provided timely, relevant information and offered tons of emotional support, by being a sounding board and offering words of encouragement and well-timed hugs. And they would turn up every week!” Holly Stilgoe, Vice Chair, thanked all the people who had given up their time for free to make the evening possible and everyone who had bought tickets. She also thanked Savills Wandsworth, who sponsored the event. Special thanks were reserved for Lorraine and Lisa, the two Home-Start beneficiaries who had been brave enough to speak and whom Holly described as inspiring examples of how to face parenting in the most difficult circumstances and as a pleasure to work alongside.

The evening raised nearly £11,000. Many thanks to everyone who contributed to its success.